Is the Market Getting Too Expensive? 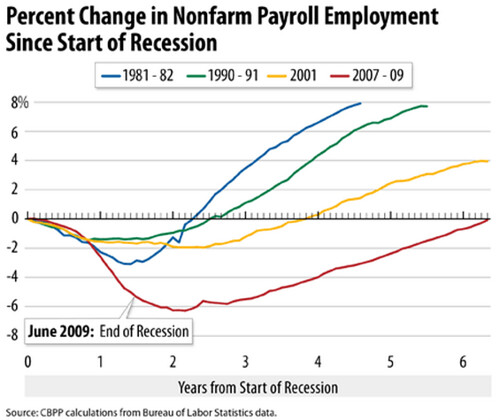 The economy has grown very slowly and that has created tough times for those looking for work. It is also curious that with each subsequent recession payroll employment has gotten worse. Perhaps the slow demise of the middle class?

Yet, the stock market has been rising at a boom like clip. According to data from Robert Shiller, a Nobel laureate in economics, stocks have been more expensive only three times over the past century than they are today. The times, the 1920s, the late 1990s and in just prior to the 2007 financial crisis. Got you thinking?

The Fed has created a wonderful environment for stocks. The unintended benefit of slow growth are low interest rates. The Fed would prefer a stronger economy but this slow growth economy is what we have. It makes for low interest rates which benefit corporate borrowing costs and make stocks more attractive than low yielding bonds. So, despite the mediocre economy, corporate profits remain strong. Wage growth is meager and there is still a huge reservoir of unemployed workers, inequality is a real fact of life for many.

To suggest that we have a new paradigm in place with low interest rates forever is just wrong. All you need to do is look to the past, 1929 (The Crash), 2000 (The Internet Bubble) and 2007 (The Financial Crisis) to put those thoughts to rest. 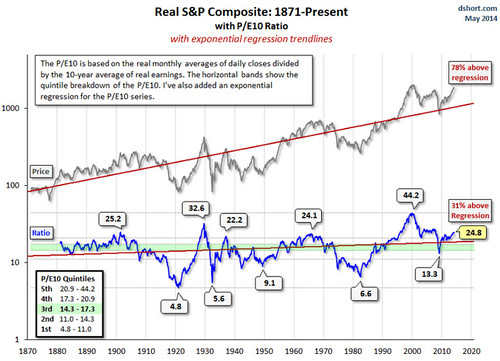 Now lets take another look. Benjamin Graham did some research on price to earnings ratios during the 1920’s and the subsequent market crash in 1929. Graham and David Dodd got together and devised a more accurate way to calculate the market’s value. They suggested that P/E ratios were sometimes affected by temporary and sometimes extreme fluctuations in the business cycle. One of their solutions to this issue was to divide the price by a multi-year average of 10 years. Ten years is enough time experience both growth and recessions and time enough to discount paradigms.

Robert Shiller has used the Graham Dodd theory which he has long published on his website. This is a version of the price-earnings ratio that compares current stock prices to average annual earnings over the past decade. Shiller shared the Nobel Prize in economics last year for “empirical analysis of asset prices.”

The 10-year price/earnings ratio appears to be a good measure of stock market valuations and can provide warnings about excess. There have been a couple of times when the ratio exceeded 25 by quite a bit but generally speaking a level of 25 is a good time to use caution with your investments. The need to watch trend lines and keep sell stop orders in place is essential.