The best advice is don’t rely on the experts

Near the beginning of the market downturn, in January of 2008, experts were asked for their predictions of where the S & P 500 would end up for the year. The high was 1680 and the worse case scenario was 1520, just click for the article.

Pay attention – Remember the cycles of the stock market 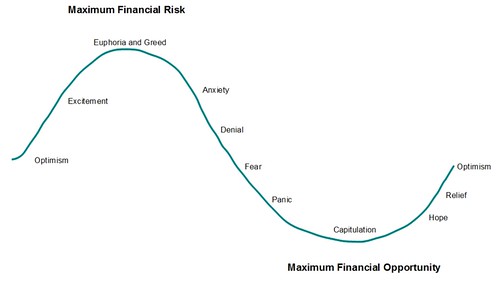 In April of 2009 the stock market bottomed. Most investors had already capitulated and left the markets after a terrifying drop to 666 in the S & P 500 (a correction of  almost 60% from its high of 1576 in October of 2007).  What happened to investor sentiment after the collapse;  it improved, going from hope to relief and even to optimism. Now that market sentiment has experienced the excitement of the last five years and has entered into the realm of euphoria and greed, you better pay attention!

Anxiety, Denial, Fear and Panic are  sentiments that we all need to avoid!

It is hard to know when a market is putting in a top since bull markets can go on for quite some time, the longest was from 1990 through 2000.

Can I simply use trend lines?

Most everyone says that you can’t time the markets, perhaps they are correct. You can, however, determine when a trend is changing and act accordingly. Trend lines are useful for identifying changes in market behavior. We’ve seen 3 distinct up-trends over the last five plus years, two of which were broken. In fact if you had sold on the first break at 1135 in the week of January 22nd of 2010 you could have bought back in October of 2011 at roughly the same price. There was plenty of time to get reinvested for the next big up move of the last three years.

If you follow the chart above from October of 2011 to the present you’ll find that there have been a number of short term corrections, none meaningful. The Federal Reserve was still printing money and keeping interest rates low. What has changed in the last few months? The economy has been improving and the Fed has been reducing their money printing, so things are changing.

Let’s take a closer look, the above chart was weekly this is daily.

The stock market recently hit new highs, however, that ended rather abruptly with the most recent correction. Since late February (about 6 months) the markets have been going sideways. This is probably a reflection of the Federal Reserve’s tapering. Investors are starting to understand the all of the money being used to prop up the markets may be vanishing. Perhaps, interest rates will also begin their rise?

Let’s say you owned Disney in your portfolio. You’re reluctant to sell since this stock has been a terrific performer for the last 5 plus years, gaining 560% from $15.50 a share.

First you need to find out what your price objective for Disney was through point and figure analysis. 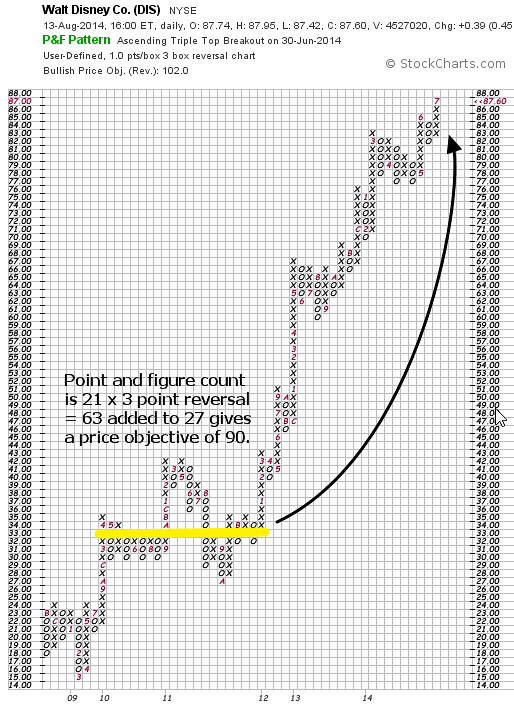 Disney stock has moved to within 97% of it’s price objective. Perhaps the stock will move sideways and build a new count to the upside? What do you do? You have a long term gain and a 560% gain is nothing to sniff at. I would take my profit and look for other alternatives and the market looks very vulnerable to a significant correction. 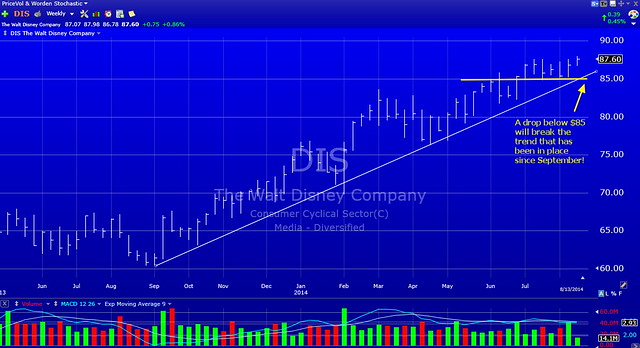 You could just put a stock loss order at 85 and take your profit and run. Breaking 85 would break the trend that had been in place since September of 2013. If the stock breaks 85 your order becomes a market order and you are sold out of your position.

So, there is a way to protect your investment without the use of a financial advisor!

I would be remiss if I didn’t share an article from Seeking Alpha by The Joyful Investor, both are great resources for someone going it on his/her own.

Richard Crosfield in his article Technical Analysis of the Stock Market mentions he couldn’t resist  presenting a chart prepared by dshort.com (Doug Short) that he came across recently: 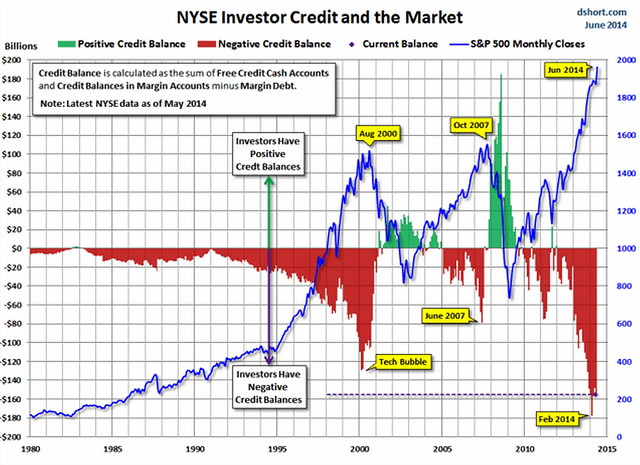 “The chart tracks the flow of funds from individual investors in the New York Stock Exchange (NYSE). It is hardly a surprise that the S&P 500 rises on the back of inflows and recedes on the back of outflows. What is interesting is the magnitude of investor buying on margin since 1998 and the rapidity with which investors liquidated their positions in 2001 and 2008. American investors have become much more active with the result that markets are more volatile now than they were between 1945 and 1998.

Doug Short recognizes that, as data for credit balances is available only six weeks after the event, it lacks any predictive power. But he comments “. . . the magnitude of the latest negative credit level is comparable to the maximum debt reached four months before the 2007 market peak. I see this as yet another caution light for investor expectations.”