Sell in May and Go Away? 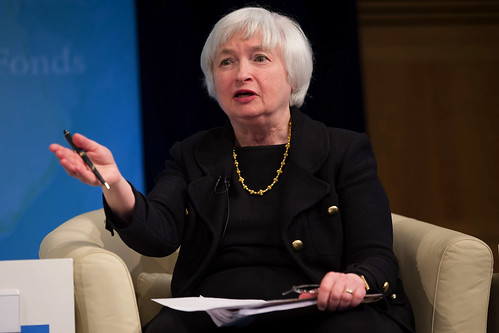 Fed Governor Yellen came out in April talking about the slack in the labor markets; that deflationary threats still remained. Deflation has the side effect of increased unemployment since there is a lower level of demand in the economy, which can lead to an economic depression. She indicated that the Fed would most likely keep interest rates at very low levels for a good time to come.

The problem as I see it is that she didn’t even discuss the financial markets and the potential for a bubble developing. Both Greenspan and Bernanke were guilty of inflating the stock and real estate markets, so what gives with Yellen?

Yellen seems to be encouraging people to take advantage of cheap credit and adding leverage to take on more risks. Doing this to spur our economy and put people back to work seems to be the logic, however, it is built on a less than solid foundation. The Fed by keeping interest rates at such a low level runs the danger of having history repeat itself. Bubbles are not bubbles until we see them in the rear view mirror. The economy looks terrific and the incentive to continue the course of action looks strong; this is what happened to Greenspan. Bernanke chose this course of action to help the economy survive. The idea of letting the “free market economy” take care of itself was too radical of an idea?

Is Yellen just playing the same game that Greenspan and Bernanke played? Doesn’t she need to be forthright and discuss the issues of boom and bust? The markets have rallied close to 200% and if the markets don’t like her remarks a correction could be good for the markets. This is a contrived market advance fueled by the Fed. I’m inserting this article by Michael Farr from the CNBC site entitled “The Fed is not the answer” it appeared after I wrote this post.

Are we approaching a bubble and does “Sell in May and Go Away” make sense. 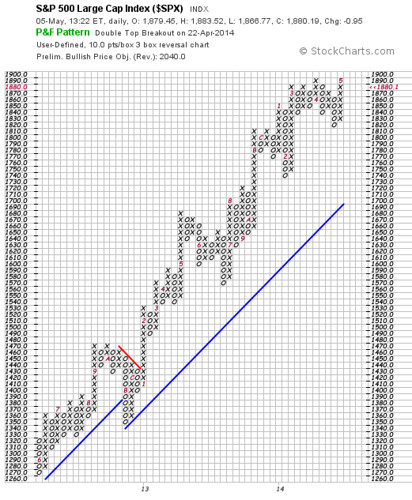 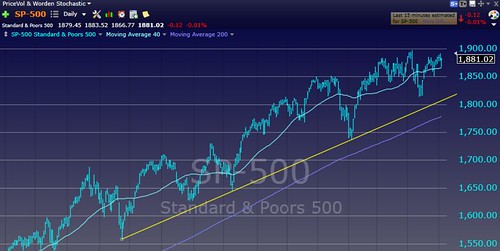 If we break to the downside and containment isn’t possible then the downside target from 1890 is 1560 or an 18% correction.

A contributing factor to a possible decline: 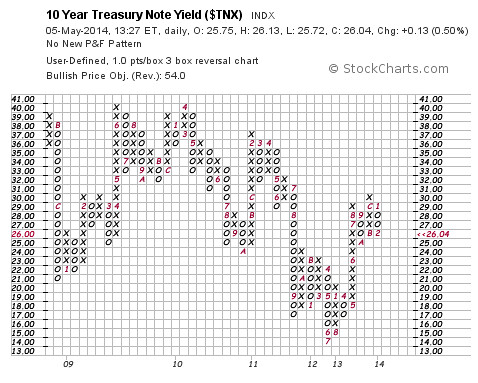 A count from the 2.8% yield on the 10-Year Treasury Note Yield (4 X 3 X 1 = 12) would indicate a yield of 4%. This would take yields back to the highs of 2009 and 2010. While not excessively high these types of yields could take some of the steam out of the stock and real estate markets.

At this time it appears as though we are just in a trading range. It appears as though rates are being held back due to the situation in the Ukraine (flight to safety). I think the odds of the count being to the upside are greater than to the downside. What could push rates down to 1.6% again?

With all of this in mind let’s address “Sell in May and Go Away.”

According to the Stock Trader’s Almanac, decades of historical research shows most market gains occur from November through April. For investors looking to time the markets for their best returns jumping into equities between November 1st and staying invested through April 30th has been pretty solid. This approach suggests shifting into fixed income for the rest of the year.

Since 1950, the Dow Jones Industrial Average has experienced an average gain of 0.3% from May through October, compared to 7.5% during the rest of the year.

Sy Harding, publisher of the Street Smart Report newsletter thinks that seasonal patterns of market performance are driven by flows of money.

“There are big chunks of money that come into investors’ hands” in the fall through spring, he said, including year-end profit and bonus payments, company 401(k) contributions, dividend payouts and tax refunds.

“Once those extra chunks of money dry up in the summer, it doesn’t leave any money available to buy the dips, and it leaves the market much more vulnerable to any pressure,” Mr. Harding said.

Mr. Hirsch and other researchers theorize that the summer doldrums in the markets coincide with the summer vacation season.

The seasonal pattern has appeared only since 1950, once the U.S. had moved away from an economy dominated by agriculture, he said.

Since 1987, though, August has been the second-worst month of the year for U.S. stocks.

The trend is still up! Don’t fight the Fed! Keep your sell-stops in place to protect your gains. A Sell Stop Order is an order to sell a stock at a price below the current market price. Once a stock’s price trades at or below the price you have specified, it becomes a Market Order to sell.

Lastly, don’t get complacent and protect yourself it is rare that your financial advisor will……………Greed is never a good thing!

P.S.  By all means don’t put your money into bonds if you exit the stock market!