So, what about the Mexican stock market, I’m living here yet I haven’t written about the markets here. The best measure of the Mexican stock market is the MSCI Mexico Index fund ETF. This fund bottomed in 2009 like the S & P 500 and hit a high in April of 2013, moving from $21.50 to $76.8, a gain of about 350%. The Mexican markets had a modest 10% correction and has been trying to re-establish an uptrend, while the S & P 500 has just continued to march ahead. 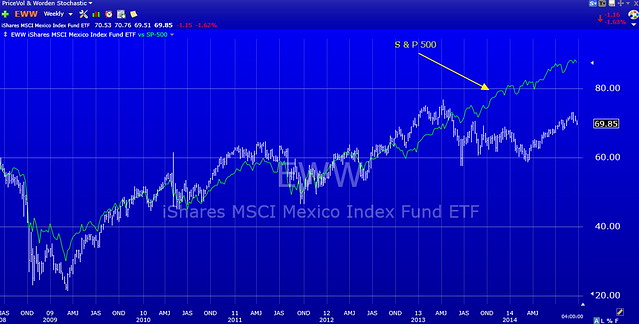 U. S. investors looking to invest in Mexico can find a limited number of ADRs (American Depository Receipts) compared to China or Brazil. An ADR is a negotiable certificate issued by a U.S. bank representing a specified number of shares in a foreign stock that is traded on a U.S. exchange. There are a number of mutual funds and exchange traded funds that invest in the country.

Recently, Mexico has been mentioned as a part of the “MINT” Emerging markets. Mexico is mentioned along with Indonesia, Nigeria and Turkey as the next economic giants. Respected economist Jim O’Neal who coined the term “BRIC” in 2001, identifying Brazil, Russia, India and China as the next global economic powerhouses, has spoken again. Should we listen? 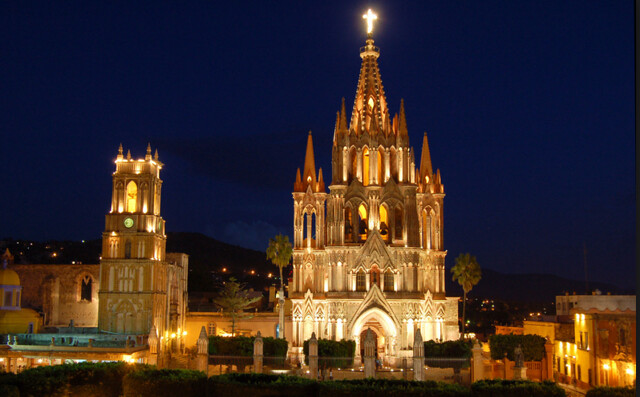 All of these countries have rapidly growing young populations, so in theory should benefit from the rapid rise in domestic consumption. In the U.S. the demographics are being skewed by the elderly. In Mexico the median age is 27, which compares favorably to the U.S. whose median age is 37.

Economists like the geographical location of Mexico, it has close links to the US and the fast growing Latin American countries, most notably Brazil. Over the past five years Mexico has significantly increased its exports into the US, which in turn has boosted growth, currently running at 3.5% a year. Another reason for the interest in Mexico are the new economic reforms that have been introduced.

The Mexican Government has dramatically lowered its gas and electricity prices, which is expected to increase foreign investment into the country. Tom Smith, who runs the Neptune Latin American fund, said the reforms could prove profitable for investors. “The energy sector in Mexico has huge potential but is being strangled by underinvestment. This should change as the government plans to open the sector to private investment for the first time in seventy-five years.”

Mexico could very well be a place to invest once the markets, both in the U.S. and Mexico, have purged their excesses.