Wow! Quite a rally that has been going on……

I know that I’ve been very cautious about this market, though I’ve stated that it is best to follow the trend. The tend is your friend and don’t fight the Fed! I have suggested that you protect your investments for quite sometime and I still feel this way.

Historically, the months of November and December are strong, the Christmas rally is for real?

This chart by David Stendahl shows you the strength of the markets during this time frame.

Everyone is kind of writing off the recent decline of 10% or so as being insignificant and perhaps they are right. In April of this year I gave a scenario  (bottom of the page) where the S & P 500 could reach 2160, so after a slight correction of this big move perhaps that number will be achieved.

Can you trust the markets with the Fed out of the picture, at least as far as quantitative easing? It’s really hard to tell, but, as always I will put forth another cautious view on the markets.

There is a bit of a divergence going on that is reminiscent of the 2008 collapse in the markets. There is an index called the S & P  bullish percent index that bears watching.

The S & P has rallied to new highs yet the bullish percent index is well below its previous high. That is a warning signal!

A look at the S & P 500 shows a market that is seeing profit taking. Perhaps, its just ephemeral and the market eill hit my price target of 2160 then again……… 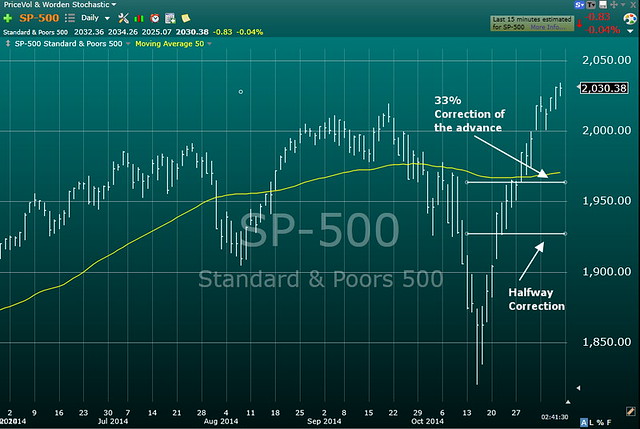 A normal correction of the recent advance would be 33-50%. That would give the markets time to rest prior to making the push to 2160. It could also fail and give the same result as 2008: 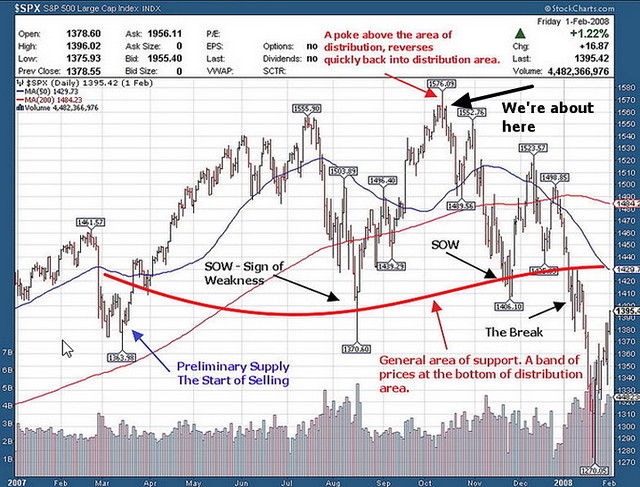 I think you can understand my concerns……….